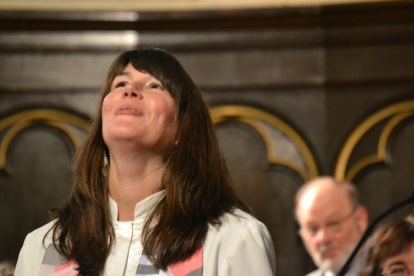 Pray Without Ceasing
Prayer is a hard-won and difficult practice for me…one that helps tenderize my somewhat hardened and forgetful heart; a discipline that helps me carve out time in my day to remember human suffering, to focus on something greater than myself, and to give thanks for all that I have.

Prayer is fraught for me, as well. I often stop to question who or what I’m praying to. I worry that I am an imposter; that God will know I often don’t believe in God. I worry about what I mean by “God” when I say that name aloud. After all, I use “God” as a symbol knowing full well that any symbol we use to describe ultimate meaning is faulty and flawed by definition. Of course, then there are the inevitable questions about whether or not God hears or answers my prayers; whether God is oriented towards Love; whether God cares about me or any other praying person. And I sometimes stumble and mumble when I pray. As someone raised atheist in a UU congregation oriented toward humanism, it likely makes sense to you that I was never taught how.

My mom asked me when I was doing hospital chaplaincy one summer if she had ever taught me the Lord’s Prayer as a child. “No,” I told her. “We didn’t say it at church growing up; we didn’t pray at all remember? We had a time for meditation. I actually learned the Lord’s Prayer as an adult. I mean, sure, I had heard it a lot growing up in a culturally Christian country, but I always got it mixed up with other prayers. I’d try to say it and it would come out something like ‘Our Father, who art in heaven, hallowed be thy name. Blessed are the fruits of thy womb, thy rod and thy staff they comfort me, for yours is the kingdom and the power and the glory (I always loved that part) forever and ever. Amen.’”

My mom was actually surprised. “Huh. Yeah, I guess I never taught you to pray because I didn’t want you to be as disappointed as I was in God when my prayers were never answered,” she said.

My mother’s older sister died at age 6 of meningitis. After her death, my mom had prayed the Lord’s prayer every night, at the end asking for a little brother or sister. Twice, my grandmother got pregnant, and told my mother that her prayers had been answered. Twice, my grandmother lost the baby at 30 weeks. After the second miscarriage, my mom stopped believing in God, and praying the Lord’s Prayer. The death of God felt like a death to her almost as powerful as the death of her sister.

My mom eventually found the UU church as a young adult, vowing to raise her children without God and prayer, not wanting her children to suffer the pain of a God who doesn’t listen, or worse, listens and doesn’t care. As a result, my mom spared me from ever being hurt by an all-powerful, all-loving God who also allows babies to die. Thanks to her, I just wasn’t wounded the way my mom was by God, and I am grateful to have escaped that searing pain and resulting loss.

And because I’m human, I couldn’t be completely sheltered from this kind of disappointment. We humans have an evolutionary predisposition toward superstition; toward believing the universe revolves around us a little bit; toward believing in the supernatural world…especially when we are children. Though I didn’t pray as a child, I knew what it felt like to be young and alone in the darkness of my room. I wished--and at times believed—that there was something or someone out there watching over me, keeping me safe, holding me and my family in love, answering my pleas for relief from sadness; for healing for my parents. I also felt the terror that I was all there was; that I was alone in that dark room. God was at once present and absent for childhood me, also. Though she understandably wanted to, my mom couldn’t shelter me from God’s absence, nor could she shelter me from God’s presence.

So, I taught myself how to pray as an adult. I wanted to stave off my ultimate loneliness, and give words to the presence of God. I needed a way to express my gratitude for un-earned gifts; to decry my brokenness and the brokenness of the world; to ask for mercy; to express my wonder; and to have a symbolic working language for Ultimacy. This was not easy to do, learning to pray. I went to my minister once as a young adult and told her that I wanted to believe in God, but it was too hard. I had been raised an atheist, I said, and I want to pray, but I don’t believe. She gently suggested to me that perhaps my concept of God was just not big enough.

Just saying that God exists, Paul Tillich tells us, puts God in the world of things to be debated.[1]  Just naming God opens up the potential for atheism. We know that every time we attempt to ritualize and read about and sing about and name and describe that which defies all categories and names…every single time we do that…we fail. We fail, and we shoehorn God into our human conception of “God.” We humanize God.  And a deeply human God is not always a God I want to get behind. Anne Lamott says that you know you are probably committing idolatry if the God you worship hates all the same people you do.[2]

But the God that is the ground of being—the God that defies the name “God,” that does not hate the same people or hate anyone or have human characteristics at all and cannot be named or summed up or described or reached, but is the very ground from which the courage to be is derived—that God is beyond all understanding and comprehension.[3] That God defies being contained in any religious tradition, or any human construct. And that God is therefore the God that I worship with all of my heart, mind and soul; the God that I am called to serve. That God is worthy of ceaseless prayer.

My grandmother’s ability to keep living and mothering after the death of her six year old, and my mom’s determination to go to a church that would accept her loss of faith despite her broken heart—these are human testimonies to this ultimate meaning I call God. These human testimonies are prayers. The act of our fellow siblings in faith coming to church despite their lonely, broken hearts is prayer. The fact that we all get up in the morning, and continue to plant our gardens despite the brutality of this world; despite the reality of death—this getting up and getting up and getting up again is prayer.

In my ministry, I want my very life to be lived as a prayer, as essential as breath. Since God is present in every breath I take and in every interaction with every sentient being I encounter, so is the open hearted prayer of overwhelming gratitude for God’s grace, the pleading prayer of desperation for God’s mercy, the lamentation prayer at the injustice of suffering, and the marching, speaking, feeding, clothing, prayer of the righteous—the prayer that makes justice for all God’s people. 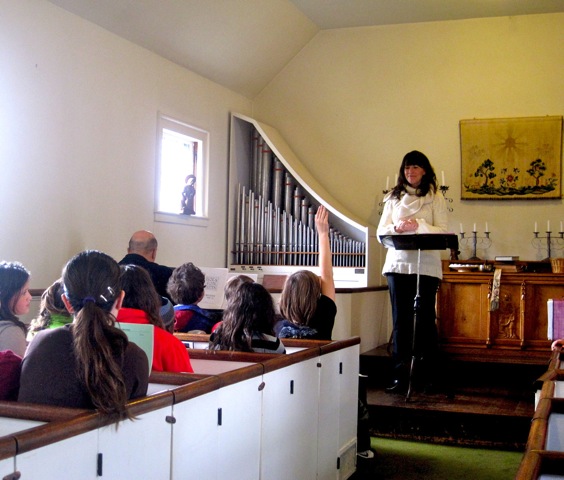 Preaching in the children's church at First Parish in Milton, MA.